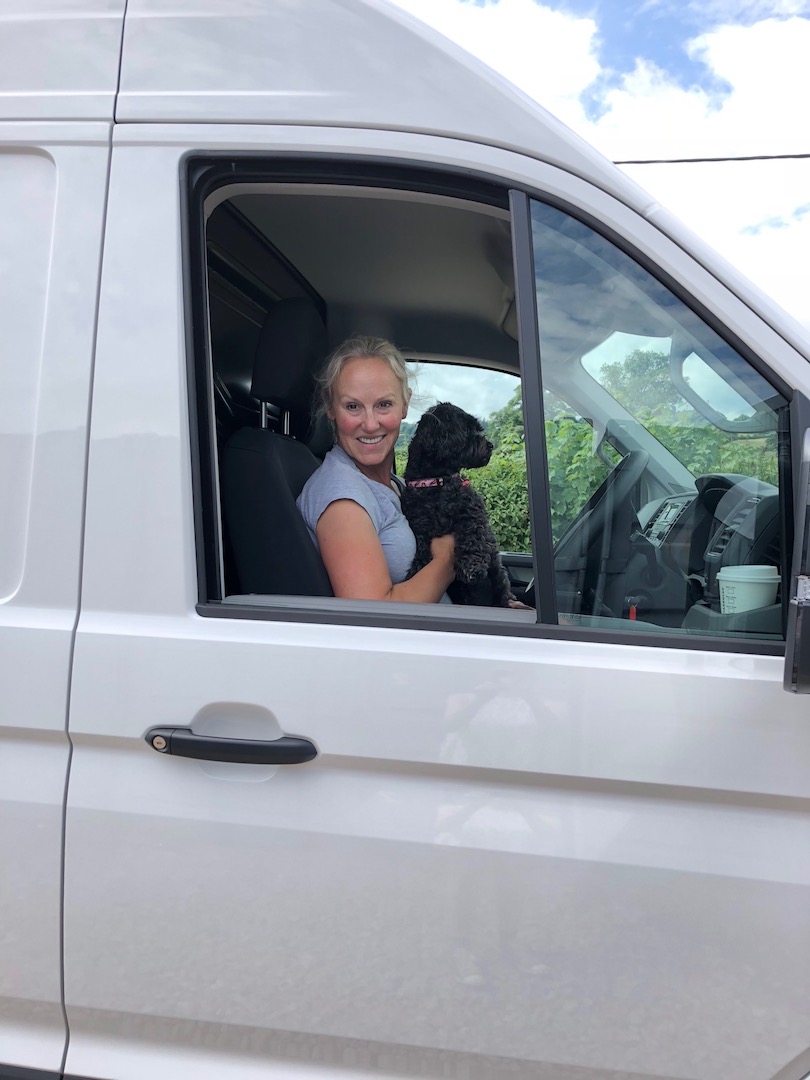 We’ve been up in Wales sorting through furniture in storage.  Pickfords we are not.  Both my sister and I have very random, but numerous, bruises in places we didn’t know we had banged things, but we worked like Trojans and are now down to one unit.  I had to hire a white van to take stuff to auction, and to move between the units.  My driving is somewhat random at best, so it was a bit of test.  For confidence, I had Betty as my white van dog.  I thought she would love it as she was up high and could see out.  It turns out that Betty doesn’t much like my driving either as she was flat on the seat with her paws over her eyes mainly.  It wasn’t a brilliant few days for her, but she was mooching around the storage unit (one is on a farm and pretty quiet) and then chilling with her cousins in the open car.  We made up for a boring day for them with evening walks when it was cooler and lots of paddling in the river.  A kingfisher shot past me like a turquoise bullet which was a dream come true – just wish it had flapped slower so I could see it better.   When we had finished, I took Betty for a good long walk around Chirk, discovering public footpaths we haven’t tried before, and discovered an airfield with a heli pad.  I don’t think it will help me much unless I win a rollover, and the airfield mainly services microlites, which I will never be going in.

Back down to London on Thursday afternoon.  An hour’s delay on the M40, so I thought I’d be clever and go off the motorway and via Banbury to cut out the jam.  It took me an hour …. 🙁  But I made it in time for an evening session with Zeus in Battersea Park.  A brown and white springer pup who has stolen my heart – from the pink splodge on his nose to his brown and pink speckled tummy when he rolls over.  He is so enthusiastic about EVERYTHING and is learning that not everyone loves him.  He met a grouchy Jack Russell called Horace who gave him a piece of his mind.  It was all over in seconds and just handbags at dawn, but little Zeus was a little piano on his walk home and it was reassuring for him to be on lead and safe with us.  Just goes to show that being on lead is never a punishment and actually can provide a sense of safety, especially after a shock, and for a London dog, walking on lead is such a huge part of their lives, that being comfortable with it is rewarding for both owner and dog.