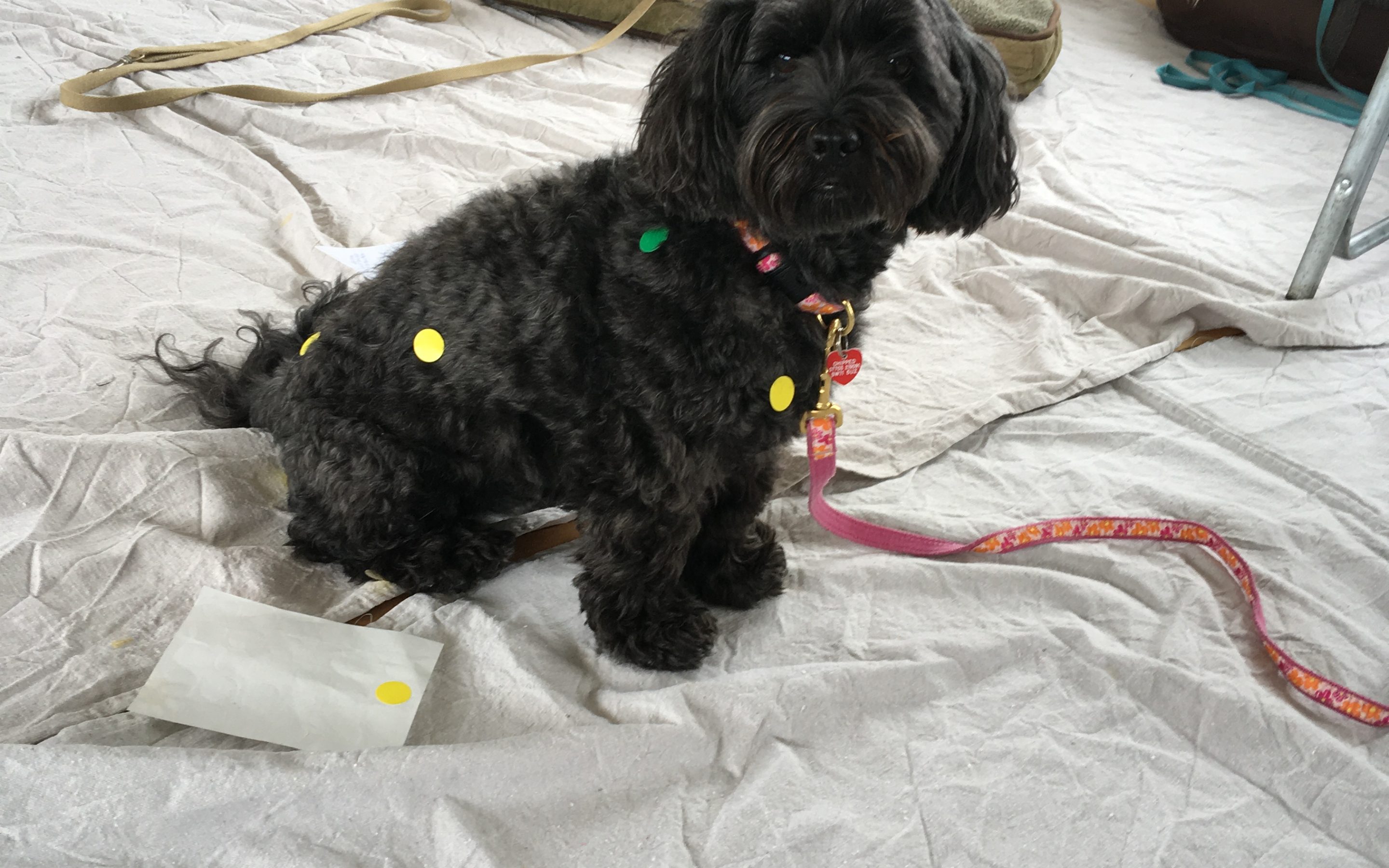 SHE DOESN’T SUFFER FOOLS GLADLY. UNLUCKILY FOR HER, I AM HER FOOL

Last Saturday, I signed up for a canine massage course. As you do. It was taking place in stunning Allerford, near Porlock in Exmoor which was added temptation. Jacqueline Brown, who runs Big Brown Dog Massage, was taking the course and I have heard brilliant things from Winkie about how Jacqueline has worked miracles on Winkie’s dogs. I love a massage myself – the firmer, the better. Giddy with excitement, it didn’t cross my mind that Betty may not be such a fan. That was an oversight.

After a minor blip when the dog-friendly pub I had booked turned out to mean dogs in the bar but not the bedroom – glad I checked – we booked into an utterly wonderful, teeny cottage in Cutcombe. A bit of a testy journey down there with the SatNav constantly re-evaluating how long it would take us … 5 hours and counting … we opened the door to the cottage to hear Classic FM on softly … a really nice touch as I was a tad frazzled.

We woke up to hear rain on the roof and the sound of the Jacob sheep in the field behind the cottage chomping away … Betty sat on the window seat watching them as I would Andy Murray and Rafa Nadal. 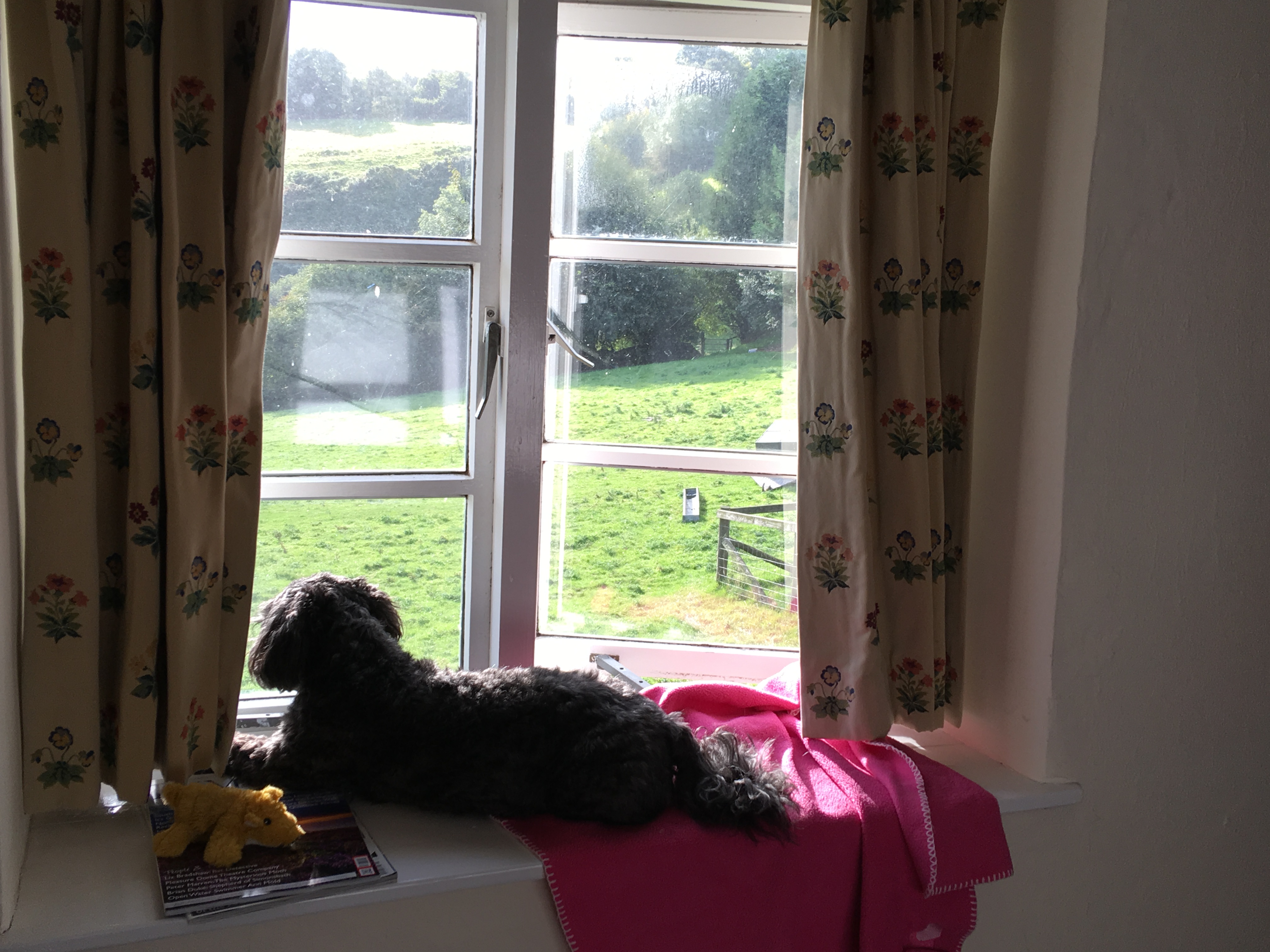 We set off after a walk around Cutcombe church, and as we came over the top of the moor, the rain cleared and I stopped to take a photo of the view 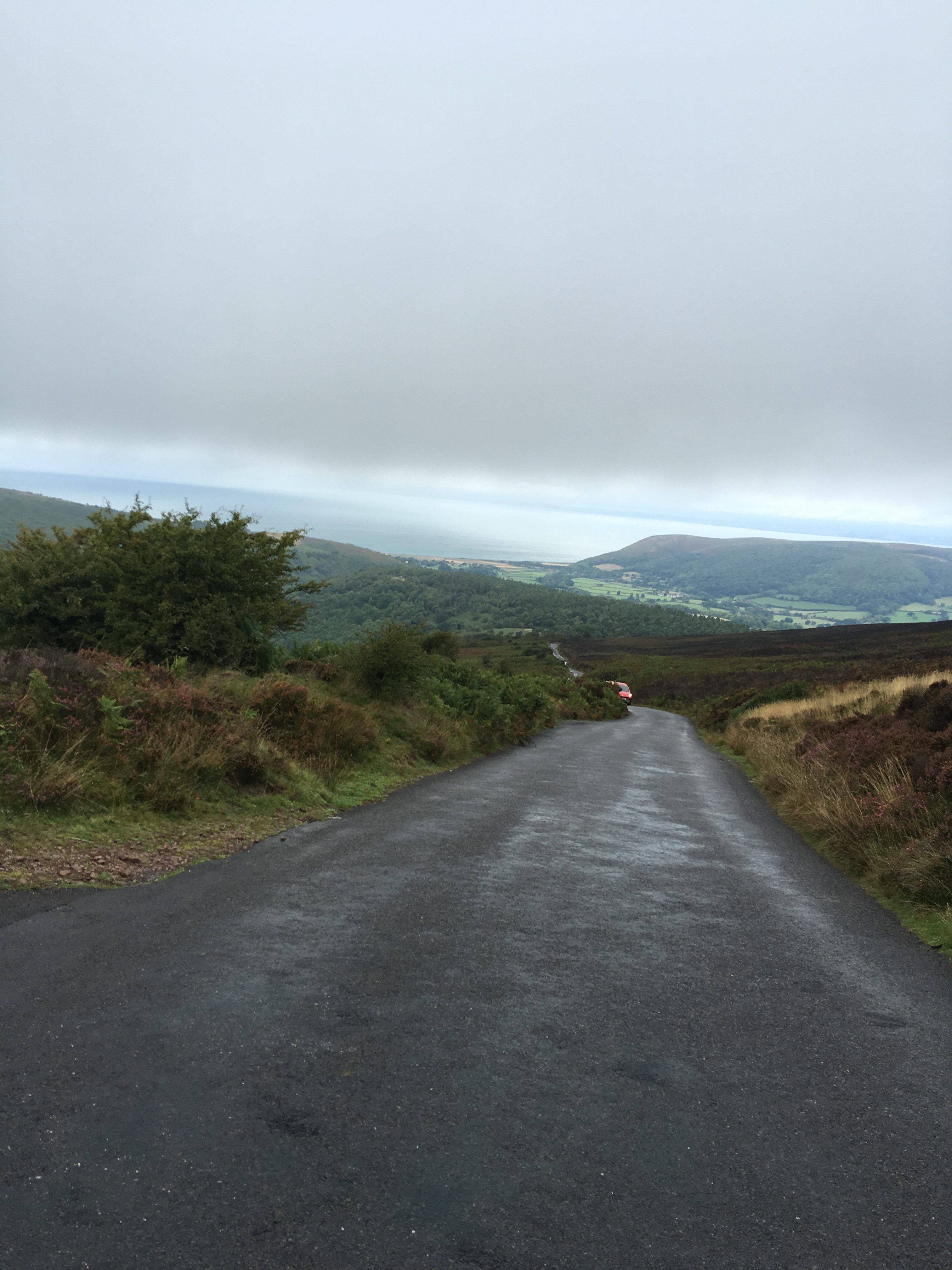 At Allerford village hall, Arletta and Angie had covered the shiny wooden floor with large hessian sheets, which made it perfect for the dogs to walk on without slipping. Small tables for 2 were set up around the edge of the hall, with space for dogs and dog beds around each. Winkie and I shared a table as Betty, Maisie and Pete tolerate each other politely. 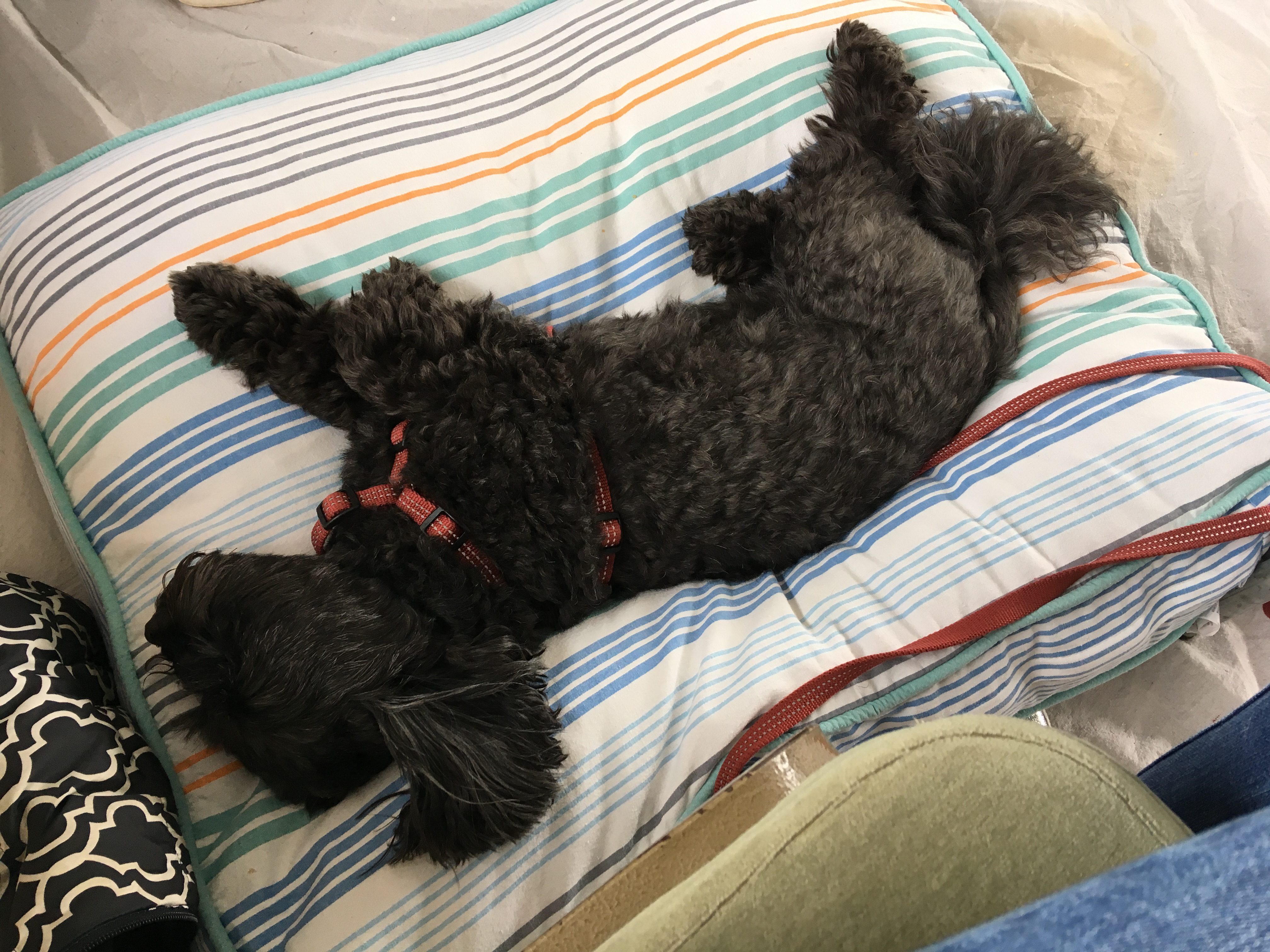 Jacqueline was in the middle of the hall and worked through theory using slides on a laptop (who knew that each dog hair is actually 3 hairs for example) and some breaks for practical. One of our first tasks was to find strategic bony points around the body to use as your ‘map’ of your dog. We put stickers on each point. Betty bore this indignity heroicly. 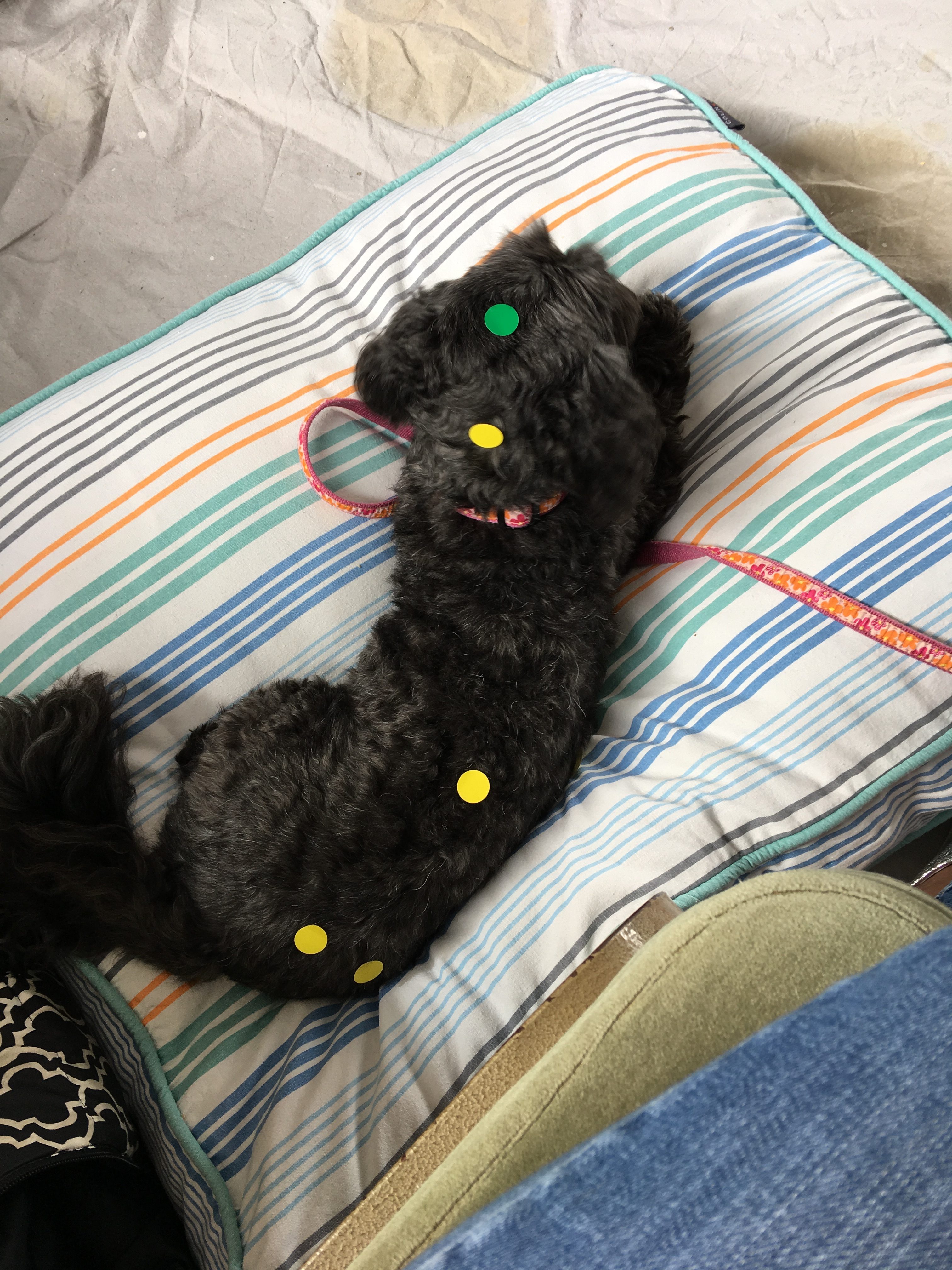 Arletta and Angie are phenominal bakers … and the cakes were simply heaven. Probably the more so as I hadn’t thought about bringing breakfast in my provisions for the cottage. A rich and – though the word gives me goosebumps – moist chocolate and orange cake, an apple cake that looked like a Bakewell tart was a Norwegian wonder, and a lemon and poppy seed one did what it said on the tin.

In the afternoon, we turned to all practical work and Jacqueline demonstrating 10 different massage techniques. This is where Betty discovered that I am her fool. Obviously my clumsy attempts at massage were not what Betty had in mind for day in Exmoor, so after a few minutes, she took herself off to say hi to everyone else in the hall. After she had amused herself with that a few times, she retreated to the safety of my chair … just far enough out of my reach from the dog bed on the floor. She may look like a cuddly girl, but in fact, she doesn’t have a high threshold for boredom and practicing humans … Maisie politely came to my rescue for a while probably as Betty’s bed was rather comfy. Just to be contrary, that then encouraged Betty to beat a hasty return … she doesn’t like her own fool practicing on others either. 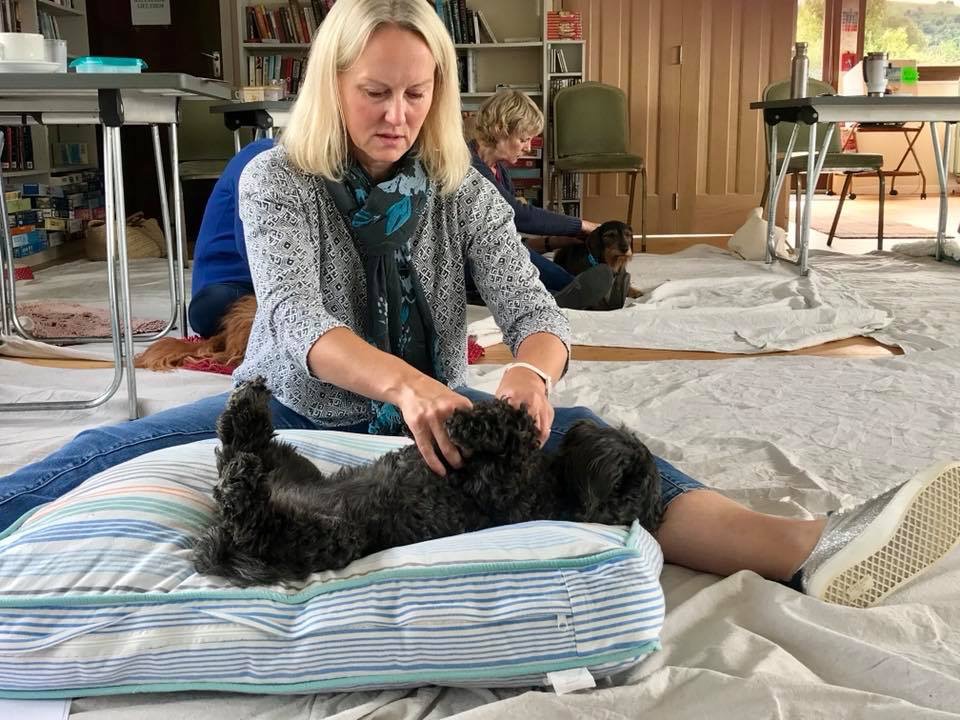 Overall, it was a really good fun and interesting day. With Jacqueline’s help, we discovered that Betty has something a bit achy/uncomfortable around her lower back/pelvis region so I have some legitimate areas to practice on … and as I think it’s from her jumping up into my car (it’s high and sometimes her back feet slip on landing) so I will be lifting her up from now on. And as a reward for good behaviour, Debs, Dawn and I took the dogs to Bossington Beach and around a nice little walk back to the ford in Bossington, where they all paddled. Probably the best bit of Betty’s day, though Elvis and Dudley adored the massage!

« #WalkiesatWisley
To vet or not to vet »