Last Friday, I took the day off and flew to Vienna for my first ever PDTE AGM. I got the hotel so fast due to the Airport train (known as the CAT …. Betty would be horrified) and the subway and emerged in Simmering which is a suburb of Vienna. The Hotel, a JUFA chain (not one I’ve heard of before … but then I hardly go to Austria often!) was situated around a pedestrian zone and apartment blocks. It had slightly garish cladding on the outside in primary colours but the room was large and spotless and a fabulous ‘Austrian twin’ bed with crisp cotton bed-linen, so I was happy. 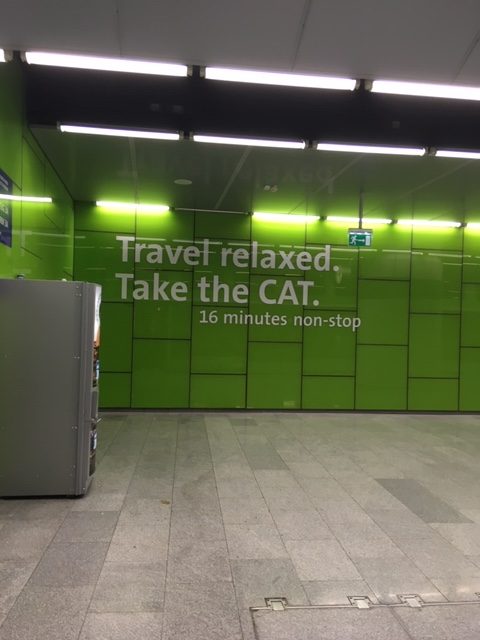 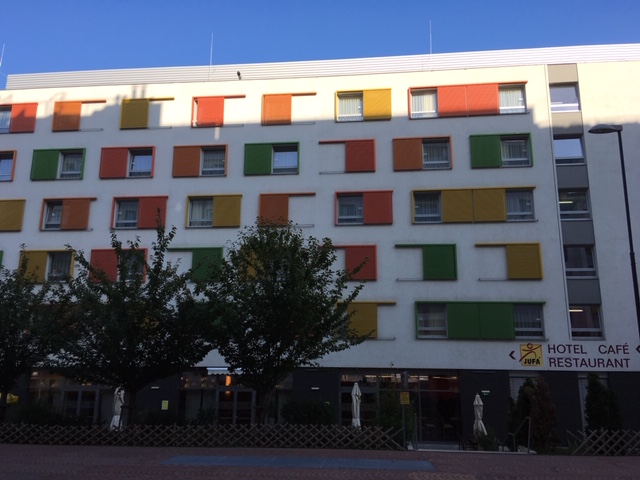 I also spotted a couple of chaps nonchalantly wearing their lederhosen … 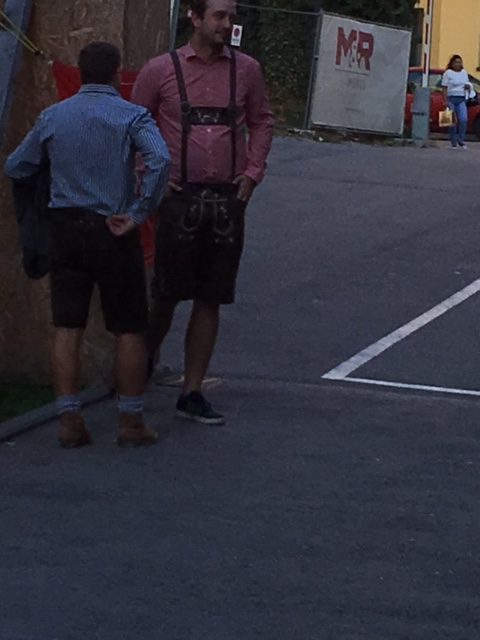 I went for a walk to get my bearings and some fresh air – gorgeous weather too. Needless to say, I ended in a supermarket – a Merkur – which was very close to the hotel. I find British supermarkets fascinating, so an Austrian one was scintillating! I need to get out more. Loaded up with sparkling water, I was at the hotel in time to change for the opening of the AGM and registration and reception. Even though I had travelled to Vienna for the event, I felt rather provincial compared to Eric and Joesun from Hong Kong and Taiwan, respectively! But it did reinforce that if people like dogs, then the chances are that I will like them!

Saturday dawned. Well hardly dawn, as I slept like the proverbial and woke up at 8.15am – the AGM opened at 9am, so I was pretty speedy getting ready and grabbing some breakfast. I had been rather pleased with my White Stuff for Battersea Dog’s Home purchase of a WOOF sweatshirt but had to do a lightening change as the conference room was so hot!

The conference opened with a wonderful film to celebrate 20 years of PDTE and interviews with Turid, Winkie, Sonia and the other board members, together with, as you would expect, wonderful footage of dogs being dogs. Then the first speaker was Turid Rugaas – the founder of PDTE. An absolute treat to listen this feisty 80’s odd lady explaining about the ethics we need to adhere to – adhere to the PDTE code of ethics – and demonstrating why each code was important. She said that we would have to harden ourselves to criticism of our way of teaching … and that she had received death threats when she started off! ‘But I don’t give a shit about that’. And you just knew that she really didn’t – dogs come first in no uncertain terms.

After a coffee break, Sonia spoke about the puppy training she does with her clients in Germany. Very similar to ours … except she has a pistol and teaches the puppies not to be scared of the loud noise a bang makes …. I asked her about and she says it works for all loud noises, be it thunder, fireworks or a fire engine … but somehow I think there would be panic stations if we practised that one in Battersea! After lunch, Steph did a thoughtful and thought provoking talk about children and dogs: life in harmony. It just illustrated again how much dogs have to learn to put up with … and we could be so much kinder to them. Then Eric, who is a born performer and very amusing, did a thoroughly interesting talk about the life of dogs in Hong Kong. Bearing in mind that they can hardly go anywhere legally, and some of the ‘dog parks’ are concrete slivers the size of my back garden, it occurred to me that you would have to REALLY want a dog in Hong Kong to have one, as it is so difficult. But, also, those who have dogs, are as adaptable as their dogs are at making the most of their situation.

I went for a walk before the Viennese Gala Ball as my head was spinning. I’m out of touch of learning and getting my brain to absorb such concentrated information was exhausting. I found a little street market in a park and bought myself an iced apple tea. It tasted like apple strudel and was heavenly. Refreshed and back at the hotel, I put my party frock from Top Shop on again (very pleased with my cost per ratio now!) and was glad I had made the effort as everyone was so glammed up and men in black tie. What an evening – an exhibition of the Viennese waltz and then some group dance instruction … somewhere between the gay gordons and a line dance. I managed to sit behind a large plant and hide/take photos. I’ve never been a dancer … nor that brave about joining in. I had sat on a lovely table of people for dinner – Lesley and Paul from Durham and a lovely Swiss dog trainer who now lives in Aberdeen. Really fascinating. Paul had recently completed Anne Lill Kvam’s nosework course, and Lesley is a zoopharmacognolist (not sure if that’s the correct word, but I know what I mean) and she recounting a number of interesting cases where it has worked unbelievably well. It did make want to let Betty loose on zoopharmacognosy as I think she is 100% happy and healthy, but I bet some of her choices would be a total eye opener to me. On my list to do as well as take Tulip to Kirsty’s Nosework centre which I am dying to do. 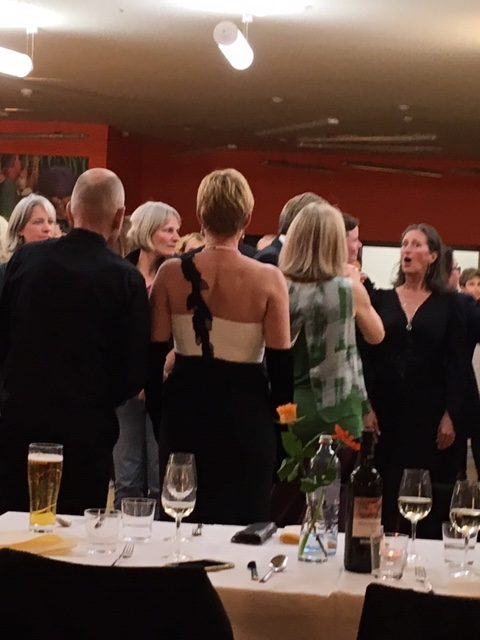 I had read in the PDTE folder that our compere for the AGM was currently performing in Vienna as a stand up comedian and was a little intrigued as to whether we would get a solo edition of her current yodelling show, Vaginas im Dirndl. We didn’t as it happened … but she was a brilliant compere and really helped the conference flow. 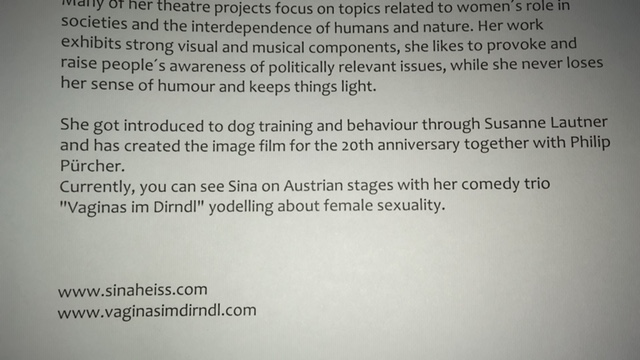 The next day started with the actual AGM and to my horror, I had to stand up and be seen when Winkie announced me as her new Futures committee member. I am already petrified that I will have no good ideas whatsoever.

Then we had the most fascinating talk by our French member, Aurelien, which he had compiled with this wife (who wasn’t able to attend) showing the results of a survey they did with 54 dogs of all ages, sizes, sex etc to determine how various walking conditions affect pulse rate and heart rate. Long/short, a short lead where the dog is unable to sniff causes a massive hike in pulse and heart rate. A long lead, eg 5m, allowing the dog to sniff, chew, scratch etc shows hugely reduced rates and actually very similar to an off lead walk. Using sensors on a harness, the survey also allowed them to determine that actions such as rolling, chewing grass, shaking also reduce heart/pulse rates, while the scratch back that dogs often do after a pee causes an instant hike. So fascinating. But now I feel obligated not to scream when Betty rolls in poop as she’s calming herself down. If I had a heart monitor on, my heart and pulse would spike at each roll!!

One of the Austrian members from South Tyrol did a good talk about how we could aim to improve shelters for dogs – by asking more questions on admission and asking more questions of the adopting family and providing support. Poor Nina had a shocking cold so I really felt for her. The AGM concluded with a talk by an Austrian Uni professor who had completed a study … in a way similar to Aurelien’s, showing heart/pulse rate data collecting from various tests in a controlled environment to demonstrate stress coping in dog/human relationships. Again, long/short, hard and aversive training produces raised H/P levels than positive training, and also that glass half empty people affect their dog in a similar way. I thought interesting in a slightly academic heavy way, and my head was spinning anyway at this point, but Turid was livid that it did not represent our way of training so poor Dr Schoeberl got a bit of a ticking off in public. 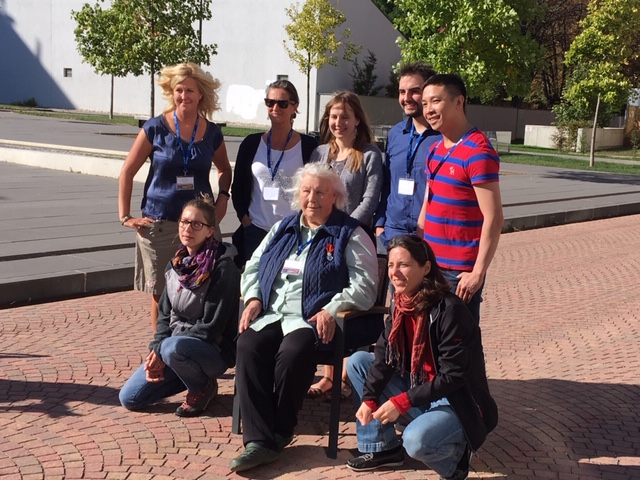 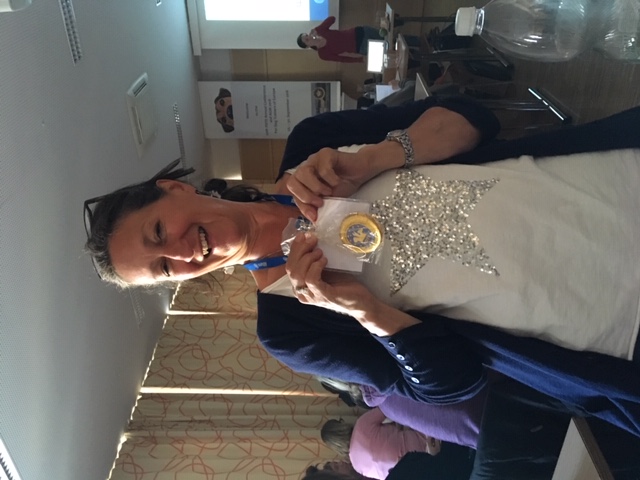 And then Winkie, Arletta and I set off for the airport. I hope my brain has expanded but even a week later, I am shattered by the learning experience! I loved it and am already looking forward to Rome as the next venue … !! 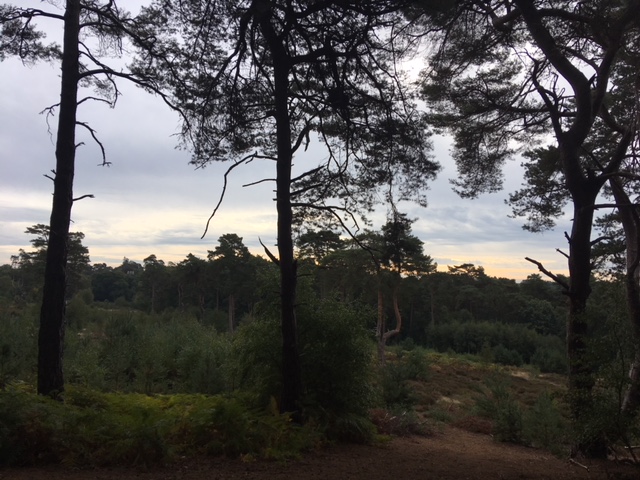 To vet or not to vet

Last Sunday, Betty and I drove down to Oxshott for a seminar at which Amber Batson was speaking on 'to vet or not to vet?'. A few things to note here. Firstly, I made a cake for the seminar attendees and I can highly recommend it. I have now done it twice. And it's...