While I was in Wales, I had some time to browse through an old photo album.  So many happy memories of our dogs … and some lovely photos I wasn’t there for, but which prove the point that we are a fairly dog obsessed family.  Here are just a few and they are photos of photos as I didn’t want to ruin the album. 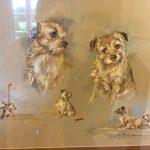 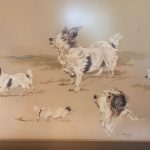 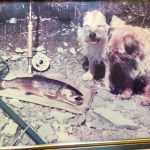 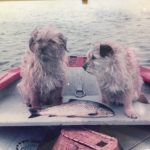 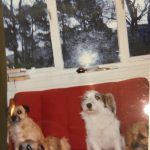 My dad was the keenest of keen trout fishermen.  Never salmon for some reason – I think I recall him saying that trout fishing was more skilful – and the dogs would always go with him.  Often he’d set off in a little dinghy he carried around on the car roof for remote Welsh lakes – he was never happier.  And that’s where his ashes are scattered too – his favourite place.

Merry was a mongrel – albeit that she would have a doodle name now if she were here today.  She was half hunt-terrier, quarter poodle and quarter old English sheepdog.  Her mum was the terrier and her father the ‘old English sheepoodle’ perhaps.  It’s only looking at these photos that I now remember she was a bit bigger than your standard terrier – probably more Tibetan or Wheaten Terrier size.  She was slightly elongated in the body and my mum was fond of saying she looked like a Dandy Dinmont.  She doesn’t actually, having seen one recently, but she was utterly fabulous.  The long hair on her ears that caught the wind as she sat in my bicycle basket, the way she thought she was a butterfly hunter and would leap into the air after a cabbage white, and the way she rolled on her back and peed in the air when a family friend surprised her coming into the house.  A dog with 100% character.  My mum was as equally smitten as me and would dress her up in weird outfits and take her to shows and so on, where she happily sat on my black Shetland pony’s bottom (Sam) lapping up the adoration from the crowd.  Shy, she was not – she and my mum were natural clowns. 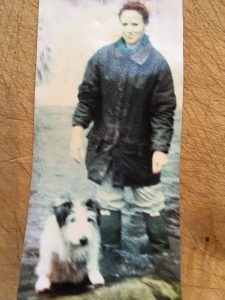 My father had a bit of thing for headgear it appeared.  Below are Tinker as a babushka, and Merry, well, who knows, a school cap?  Behind Tinker, is my sister and Bumble. 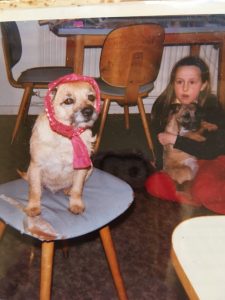 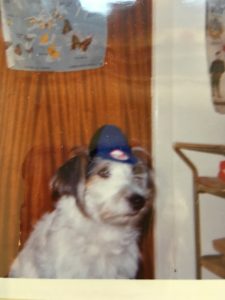 And then we have some approximately 51 year old photos.  It’s my sister, not me, but I am reasonably sure I had the same dog nannies as her. 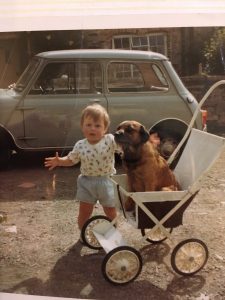 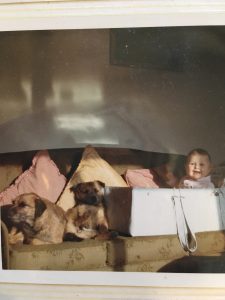 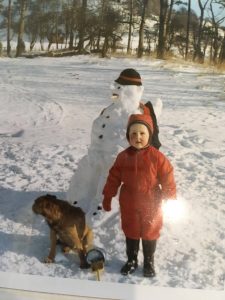 The border in the push chair and with the snowman was Demon, but I don’t know who is next to the carry cot.  I know a couple of our borders disappeared in badger sets and fox holes up on the hill which was heart-breaking – terriers get into trouble with their enthusiasm to hunt. 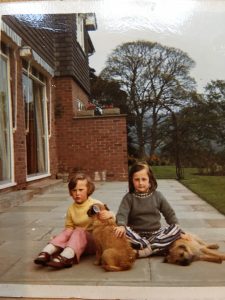 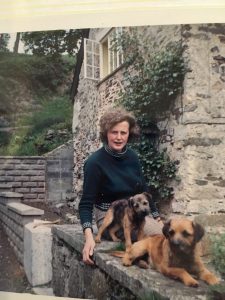 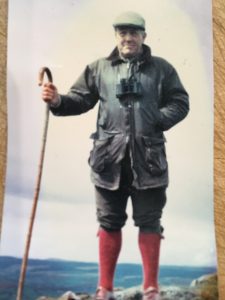 And then just a few more to finish up my post … how much have I enjoyed remembering these old faces from my childhood – the happiest of times. 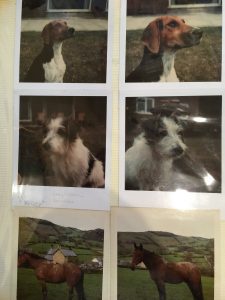 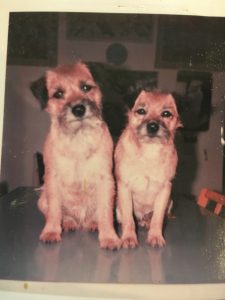 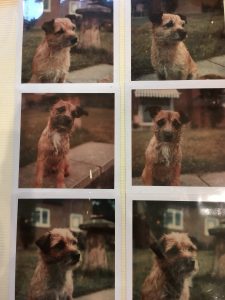 « Dappled dogs
Washing behind your ears »